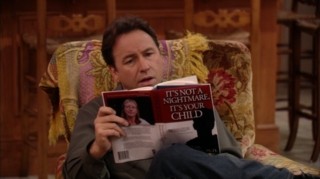 The episode begins with Paul Hennessy and Cate Hennessy coming home after a lovely dinner; Cate remarks that they should do that more often, and Paul agrees. However, they soon see their youngest son Rory Hennessy tied up with rope and rolled up in a carpet. Cate unties him as Paul yells for Kerry and Bridget; they come downstairs acting innocent, and Paul gets really mad at them. Rory says they put him in it for spying on them. The doorbell rings and a guy named Anthony W is there when Paul opens the door. He is wearing a white shirt with a black and red sweater open to reveal a gold necklace. He has on black track pants and a blue bandana. He's looking for Bridget and Kerry and starts talking slang that Paul doesn't understand; the girls try to leave with Anthony but Paul closes the door and says they're grounded for tying up their brother. Bridget says he's the coolest guy in school, and Paul backtracks. Bridget says she doesn't understand why she's grounded because they left him a bowl of water; however, it was out of reach. Bridget calls Paul a life destroyer, and Kerry says he's meaner then Angela's father who did time. As soon as Rory's untied, he bolts to the bathroom.

The next scene opens with Paul in the family room reading a book called "It's Not a Nightmare, It's Your Child". Paul suggests she get one and Cate shows him she bought it for him in 1996. Paul says they are beating him down and it all started when Cate went back to work. He says his relationship with the girls are going further south. He wants to go back to when he was a sports writer and they were happy to see him. Cate says of course they were happy to see him; he came back with arms full of presents: "You were Santa Claus. That's when they hated me." Paul decides to test how well the book works.

When Paul asks how school went, the girls start listing how many teachers hate them and if they called they lied. Paul then asks what kind of school do they go to. They say they are sleeping over at friends houses and call Paul "warden." Paul says they can go, which astonishes the girls so much so that Bridget asks what's wrong with him. He asks Bridget what's new and Bridget starts rambling about how a girls button came off and Paul just smiles and nods.

Rory enters and tries to play the guilty card by saying his rug burns still haven't healed but he is trying to help out around the house trying to get a monkey, which Paul automatically says no to. Rory then says "that's not what I wanted to say," and hands Paul a pink flyer that fell out of Bridget's jeans and one that was under Kerry's mattress. The flyer is about an extreme rock-fest on Saturday night. Paul now assumes that the girls are lying to him about sleeping over and are sneaking out to the rock-fest. He then hands Paul the phone and tells him the numbers of the girls Kerry and Bridget were supposedly sleeping over at.

Later that night, Paul shows Cate the flyer. Paul then turns to the book to find their appropriate punishment. He then reads from the book that you must present them with opportunities to come clean. Heather then calls Bridget and tells her that Paul called. Kerry laughs at her sister’s misery. Paul enters the room and tries to give the girls the opportunity to come clean by asking if there's anything in their minds. Bridget comes to the conclusion that Paul doesn't care if they go to the concert.

Bridget and Kerry realize that Rory snitched on them and wake him up. They clamp their hands over his mouth and threaten him with the carpet if he yells. When Bridget then threatens to give his comics to mom and dad, he says, "So? They're just comic books." However, Bridget says she meant the secret ones; they then learn about the parenting book.

Kerry and Bridget find the parenting book. They decide to use s concept in the book where they confess and then Paul would say that it's their decision if they want to go or not.

Rory then takes his comic books out of Kerry's guitar case just as Cate enters the room. Rory says he's thinking of taking up guitar, and Cate replies that she always thought he was the musical type. She opens the guitar case, and Rory says he thinks they're Kerry's, and that she might be gay. Cate says that the magazines he has are "insulting to women". Rory corrects her, saying that the title is actually "A Celebration of Women." Although Cate says "the celebration's over", she then looks curious, and asks Rory what the magazines are doing in his room. Rory then admits that the girls are blackmailing him, and tells Cate to punish them. Much to Rory's puzzlement, Cate starts laughing, and says she'll "tell Dad eventually."

Kerry and Bridget start to put their plan into action. They admit to going to a concert and he says he's glad they came clean, but he's very disappointed in them. He says he's going to leave the choice up to them. After pretending to think about their decision, the girls then leave as Paul is talking to Cate about how good his plan was

Cate admits to Paul that they read the book, and Paul is worried.

Community content is available under CC-BY-SA unless otherwise noted.
Advertisement